Dedushka, the First Book in the Jake McCluskey Series 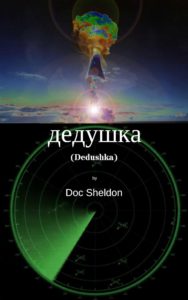 In late 2016, I decided that my next writing exercise would be a work of fiction – my first. I began toying with various ideas, but none really clicked for me. So I browsed through my collection of books, trying to identify the kind of story-telling that resonated with me. Finally, I settled on Tom Clancy’s style. Bingo!

The problem, of course, was that I was no closer to deciding what sort of story to write. That process took me another 7 or 8 months, as I considered and discarded a dozen ideas. Some took just an hour or so, while for others, I had to write 2 or 3 chapters before deciding I was on the wrong track. Finally, I came up with Jake McCluskey… an erstwhile US naval officer, suddenly plunged into the navy of the Russian Federation by a strange series of circumstances.

I enjoyed writing Dedushka – researching minute details of vessels, weapons, specific buildings and the web of details to tie them together was a huge part of that enjoyment. Exploring the potential geopolitical impacts of the tale were equally satisfying. The part I struggled most with was finding the right amount of character development. I read somewhere that that is supposed to be the easy part. Nope! Not for me, at least – I had to do a lot of re-write to get that to a point where I was satisfied with it.

I originally wrote Dedushka as a 425-page tome – too long, by popular editorial wisdom. So with the second edition, I’m breaking it up into two parts: Dedushka being the first, followed by Confrontation, which extends beyond where the original story stopped. The third book, Legacy, is already underway and involves just as much detail, intrigue, and action as the first two. Until all that is done, the First Edition will remain available in either paperback or Kindle, on my Amazon page.